At the corner of Live Oak and Laurel in Rockport is an unassuming, wood sided house with large red, white and blue wreaths along the side facing Live Oak. The center of the wreaths identifies this as the Veterans’ Outreach Center with an official address as 900 East Laurel.

As part of the non-profit Coastal Bend Troop Support, the Veterans Outreach Center exists for troops who have returned home. They may be on active duty, in the reserves or discharged from their military service.

Two veterans volunteer each week to offer their time, experiences and knowledge to any of the troops or veterans who walk through the door. Choosing to be only known as Mike, a Vietnam veteran provides a welcome home to “any and all” who have never heard those words. He leads Peer Group meeting each Tuesday from 5:45 p.m. until 6:45 p.m. or until no one has another question. 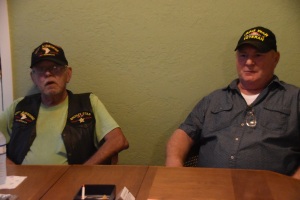 The Peer Group meeting immediately follow The Community Table (TCT) at the First Presbyterian Church located across Laurel Street. TCT is sponsored by the Rockport Ministerial Alliance which includes seven churches. Member of these churches, as well as some community organizations, take turns providing and serving the meal.

“If someone is in dire straits, they can come here,” Mike said. “We have a shower and washer and dryer and some food. We can help them out that way but we don’t have any funds to give monetary assistance.”

Mike did say if the veteran resides in Aransas County, there is a community group which provides emergency funds to “help them get over the hump of the problem they are having.” He continued saying when any veterans who are in need come in, they try to point them in the right direction.

John Kroll said he always encourages veterans to register with the VA. He said many do not like the VA at all, but he stresses to at least get registered.  Other common assistance John and Mike provide include getting and/or correcting a veteran’s DD 214 discharge document or accessing a person’s military records. They can explain Federal Benefits and Services and those of the Texas Veterans Commission including Survivor Benefits.

“We’ll talk to anybody who comes in. If someone knocks on the door and takes a step over the threshold, we’ll talk to them about whatever they need.” ~ Mike and John

“When we came home (from Vietnam), PTSD was not even acknowledged so most Vietnam Veterans say they don’t have PTSD and their wives say they do.” ~ Mike

John commented a lot of the younger guys shy away from anything relating to PTSD. He said some are still in the military and that can just end your career right there if you start getting treatment for PTSD. He added if you are a pilot, you are grounded. They really cut your career short. So, when they get out, they don’t know what to do or who to talk to.

The PTSD Foundation’s Camp Hope facility opened in 2012 in Houston. It provides temporary housing for veterans and their immediate family members while benefiting from an intensive peer support and mentoring program for Post-Traumatic Stress.

The Veterans’ Outreach Center gives each visitor copies of the reference materials for the faith-based program followed at Camp Hope.  The workbooks were developed for the Military Ministry “Bridges to Healing” series.

For more information about PTSD and the PTSD Foundation’s nation-wide services go to http://ptsdusa.org.

John said “I get calls from Houston all the way down to the Valley. I don’t know how they get our number. A lot of times, someone will call and I talk to them but they never come in. I gave them a band aid and they are fine until they need something else.”

“On Mike’s meeting nights, six or seven might show up,” John continued. “Then on my nights, I may get one – I may get three – I may get none. But the thing is, as long as we’re here, when that one person comes to the door, we’re here.”

“If we help one guy, we’ve done something!” ~ Mike