A young blonde woman from England, named Suzy, was a front desk manager at the Tres Rios Resort in Glen Rose, Texas. Russ Walker was providing internet technology services and Tres Rios was one of the companies he serviced. She kept breaking the internet, computers and phones and things so Russ had to visit the resort and repair them.

Suzy said Russ started hanging out when he came there and Russ added, “It blossomed into love”.

They moved into a house in Grandbury and two weeks later on a Wednesday night a tornado hit … completely wiping out the house. Suzy said, “I was in the house when it hit. Russ was still living in Texarkana, traveling back and forth on the weekends.”

“It had just leveled the house to the slab”, said Russ.

In Suzy’s words, she had a “broken arm, busted back, and I was afoot.”

“We lost completely everything,” said Suzy. “We found another house that had a tornado shelter next door. We lived there another year but that year there were about 49 tornado warnings in one month. And, we were like ehh, NO!”

Act II  Beach time for her

During the time the couple was together. Suzy said they kept coming to the beach on vacations. She had lived by the beach her whole life while in England.

They always spent these vacations in Port Aransas, close to the Gulf of Mexico beaches. One day Suzy suggested going to Rockport to see what it was like. Russ said he did not want to go to Rockport.

The Rockport visit changed his mind. Job hunting began. He put in an application, got a job and they moved to Rockport in two weeks.

Act III  Theater for him

Russ said he been involved in theater since he was very young … through high school, through college. A few years after he graduated he become involved in local theater. He had been involved in Plaza Theater in Cleburne, Texas, which did shows year-round. Suzy became involved also, auditioned and performed in A Christmas Carol.

Soon after they moved to Rockport Suzy saw the audition notice for The Addams Family. Russ auditioned and was chosen to play the role of Uncle Fester in Rockport Little Theater’s production. Russ found a new theater to love.

Hurricane Harvey was headed for the Walker’s new home in Copano Village which lies on the southeast banks of Copano Bay which forms the western limits of Rockport. The morning of August 25, Harvey’s projected landfall in Rockport would then track the storm over Copano Bay.

The warning for the tornado which destroyed a home with Suzy inside only allowed minutes to seek shelter. This hurricane warning allowed a few hours and that afternoon, the couple left Rockport headed north to Granbury. For a few hours, they had contact with friends in Fulton. When Harvey reached the coastline and the beaches Suzy loved, all communications went down. 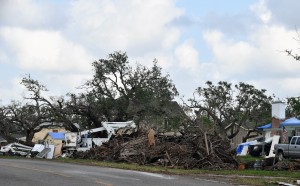 They returned to find their house had survived the destruction with little damage even though many beautiful live oak trees around them were marred or uprooted. Their theater home, however, suffered a greater loss. Rockport Little Theater could no longer use the building where their theater productions were performed so the planned rehearsals for Annie were canceled.

“There wasn’t anything in the works,” said Russ. “Rockport Little Theater didn’t have anything planned to do so we decided to form our own company, Aransas Repertory Theatre. We had been toying with the idea before the hurricane but that just solidified it for us.”

Suzy added, “There wasn’t anything happening in Rockport and we wanted to keep the theater going.”

This new venture will continue to do main-stage productions, but they have plans to expand to other types of shows such as performing in festivals, having pop-up theaters downtown in shops, presenting theater events in the parks, talent shows and game shows.

They had volunteered a few times at the Rialto Theater in Aransas Pass and had a relationship with Karen Froeschner and Jen and Jake Rubinowitz before. Suzy currently works as the Rialto bar manager. So, the Aransas Repertory Theatre held their first events at the Rialto Theater. December featured Caroling then a Newlywed Game Show was highlighted on Valentines’ Day. Their first major stage production, Ripcord, will open April 6.

“Ripcord is funny, it’s heartwarming, and everybody can recognize someone like the characters in the show,” said Suzy. Russ said simply, “It’s bust a gut laughing…very, very funny!”

Karen Froeschner, well known in Aransas Pass for her Rialto performances, is playing Abby and Barbara Klemm is playing a character called Marilyn. They both share a room in an assisted care center but Abby has the bed by the window and Marilyn lives across the room. They make wagers with each other.

“If I can make you angry, I get the bed by the window.”

The crazy things they try to do to each other is what this show is about.

As the director, Russ said he chose Ripcord as a comedy that is going to have people talking about it because it is so good and hilarious. As three of the characters who pop in and out, he will be contributing to the comedic acting.

Suzy is the stage manager and will be behind the scenes to keep the show moving.

The EF-0 Tornado touched down across Copano Bay in Holiday Beach.