Mid-afternoon on Friday, April 20, a biker wearing a neon yellow helmet and jacket came over the crest of the Dale Miller Bridge on Hwy 361 on a touring bike with red and black saddlebags. Close behind came a second biker wearing a similar helmet and jacket but with blue and white saddlebags. As they reached the curve entering Aransas Pass, they slowed down, pulled into the left-hand lane then turned into the entrance of the Microtel Inn and Suites on Goodnight Avenue.

The first bike rider pulled his bike past the hotel entrance, set the kickstand, removed his helmet and started inside to register as Microtel General Manager Rene’ Thakor was at the door. As the second biker pulled up to the entrance, Thakor invited the couple to bring their bikes into the lobby.

Jerry and Lori Bocrie had just completed Day Six of a planned two-month bike tour along the Gulf Coast to the Florida Panhandle. They arrived in San Antonio by plane from Virginia Beach, Virginia, reassembled their bikes, spent a day sightseeing then began their South Texas Coast part of Tour de Bocrie, 2018.

The Bocries try to average 50 miles each day so Jerry spends hours each day planning the route for the next leg of their adventure.

“We do this every summer and have crossed the United States four times; three times coast to coast and one time from Vancouver, Canada to Tajuana,” said Lori. “We have also done all the UK; England, Scotland, Ireland. We have gone all over Europe; Lisbon to Rome, Amsterdam to Budapest, and all northern Germany from Prague to Amsterdam. We haven’t missed a country in Europe yet. We are planning to go back one more time.”

Jerry added, “We have six states we haven’t touched in the Continental United States. My bucket list is to hit them all but I will be 75 this year and I’m getting more tired the older I get. We train hard for this. We bike all year long but it doesn’t get any easier at this age. The recovery rate isn’t as good as you age.”

“We’ve had winds here every day since we got here,” said Lori.

Jerry explained, “We try to average 12 miles an hour. We were averaging six (from San Antonio to Corpus Christi). The wind was beating us up.”

The couple explained their bikes were custom made touring bikes from England and are strong enough to carry 60 pounds of gear plus their weight. They are outfitted so panniers can be attached.

Jerry said. “They are very sturdy, like having a good horse.”

Lori added she always calls the panniers, saddle bags. “It’s appropriate since these are our steeds!”

“If you lose faith in humanity, get on a bike and get to the middle of the country and see what real people are like…”

When asked what they love most about touring by bike, Jerry said, “We burn about 5000 calories a day and we try to find all the local restaurants we can, not fast food or chains, but the little local restaurants. And then the people. The people we meet are incredible. I could tell you a hundred, if not a thousand, people we have met across the country.”

They feel they are more approachable on the bikes and people are curious and ask questions and want to talk about their tours. They have made friends that touch base with them often…from California, from England, from Minnesota. Jerry describes it as “incredible”.

Lori described the amazing sights on their very first tour from San Francisco back to Virginia Beach. They were only going to do it once, one of these whim things after retirement, and they hadn’t trained for it but as she biked through the desert, she was noticing the little things.

“You look at the pretty flowers that are on the side of the road and you learn to appreciate smaller things,” she said. “You learn to live without a lot because anything you are going to wear or do, you have to carry. It gives you a better appreciation of who you are and what you need as a person to be happy. That’s from a girl’s point of view versus a guy’s point of view.”

Since they had just arrived and had not even unpacked, Jerry interjected, “Cold beer, the best cold beer in town.” 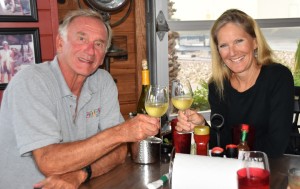 Their Day Six ended with dinner at Redfish Willies’ waterfront restaurant with a bottle of wine, instead of beer, and new friends.

Jerry and Lori share their daily progress, sights and their dinner choices on their blog,