On August 25, 2017, Carolyn Sloan-Thibault was in Austin helping her grandchildren get ready for the new school year. She had been there for a week and had carefully followed the tropical weather forecasts for the Rockport area. When hurricane warnings were issued for Rockport, she called her husband, Ron Thibault, who said, “Don’t come home!”.

During the storm, her husband, Quartermaster for VFW Post 6386, stayed in the Ingleside VFW hall. Carolyn saw the destruction on national tv so she was prepared for what she was going to see when she returned home. She knew it would be bad.

“I came home Sunday morning (August 27),” she said. “I couldn’t get through all the roads, so I had to go through Taft and come back in. I had one lane to get here.”

As she arrived at her RV Park and home located at 4230 Business Hwy 35 S, the Dream Chaser sign was no longer visible and she was not able to enter her property.

“I pulled in and every single trailer was demolished – not turned over, literally crushed, flipped long end over and on top of each other”, she said, “We were just blessed that no one was hurt.”

Tree limbs covered everything and 30 trees were destroyed. The three outbuildings were piles of rubble on top of the tractor, four-wheelers and other equipment. The one rental house was no longer habitable.

“Harvey decided we had too much stuff,” Carolyn simply stated. “We literally scraped it off and started over.”

Carolyn came to Rockport in 1995. She had been a refinery supervisor in Houston and pulled her retirement and invested in the property on Business 35. She said it was totally overgrown in the 15 years after it was Wind Swept Farms. To go from the highway to the main house required a four-wheeler.

For two years, lawn mowers and chainsaws were running constantly when she got off work from her full-time job and on weekends.

“When I was out there clearing the property – hot, sweaty, bloody from vines – I thought I must be chasing a dream,” Carolyn reminisced. “So, I named it Dream Chaser because of the work involved in trying to get started.”

Dream Chaser had six trailer spots in 1997. As money and time permitted, she added to it. Carolyn said it was a slow process, but she had 20 sites by 1999. Dream Chaser was at 100% occupancy from then until Hurricane Harvey visited and everything changed.

She and her husband first removed trees for access to their home which sits behind Dream Chaser, then Carolyn began taking photos of each RV and trailer. As soon as cell phone service was restored, she began contacting each of the Dream Catcher residents and sending them photos of their property.

“Don’t come here,” she told them. “There is nothing left.”

Some did come and retrieved their personal belonging and Carolyn said that was all she could do for them. Only three had insurance. The rest left their damaged trailers and never looked back.

“They lost their homes and that was pretty sad,” Carolyn said. “They made a home out here. It was a community, not just a trailer park.”

Then she began the cleanup, massive amounts of cleanup.  Her husband went to Florida as an insurance adjuster since they needed income while she tackled Dream Chaser’s restoration.

She said her biggest problem was the looters – day and night. “We had a lot of law enforcement,” she recalled. “They even brought us water and hot food while we were working. There were eight of us here with no other place to go. We used a generator and inflatable mattresses on the floor.”

Carolyn borrowed a friend’s tractor and started pushing debris to the edge of the highway. The insurance companies towed the three damaged trailers away but all of the personal belonging from the outside were left for her to remove.

“We replaced the sewer, the water, the telephone poles and meter boxes at our own expense and just started over,” she stated, then added, “So, we have a new park with an old name.”

Dream Chaser still has 20 sites but through a contract with FEMA, 15 of them are filled with new RVs and new residents who lost homes in the area. Currently, there are three sites open and repairs to her home are not complete, but Carolyn Sloan-Thibault is not discouraged.

She said in a matter-of-fact tone,

“Eat the elephant, one bite at a time!” 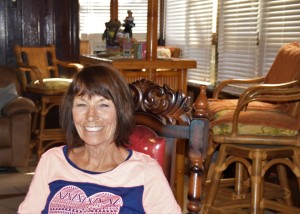 2 thoughts on “Chasing a dream”