The Saturday before Mother’s Day, Half Priced Books’ customers were surprised to see a colorfully decorated table with a special cookbook gift option. With a welcoming smile, “The Tex-Mex Slow Cooker” author Vianney Rodriguez greeted each person. Released on March 6, 2018, this cookbook realized the childhood dream of an Aransas Pass native and with printing beginning immediately following hurricane Harvey, she added a message to her Aransas Pass community.

Vianney Rodriguez is a nationally recognized food blogger. April 1, 2015, her first publication, “Latin Twist”, was released. This cocktail book was co-authored with another food blogger so “The Tex-Mex Slow Cooker” is her first solo project.

Vianney said, “When you put out a slow cooker book, it better be easy…You don’t have to do 15 steps before you put it in the slow cooker.”

She admitted before she began developing the recipes for the new cookbook, she only used the slow cooker for beans and casseroles. Vianney had to adapt recipes from the way she usually cooked them on the stove top. She said the new green and red enchilada sauces taste so good. “I’m really excited about those.”

The cookbook includes recipes for entertaining, brunch, easy family dinners, deserts and of course, Vianney’s original beverages. For each one, she includes an intimate family snippet or suggestions for combining one recipe with others.

Vianney, her husband and two daughters have been living in Aransas Pass next door to her parents and close to her sister and family. Her mother would visit each morning for coffee while her granddaughters had breakfast. The girls enjoyed time with their cousins often and it was not unusual for the families to have dinner together. Hurricane Harvey changed their normal routine.

While living here in Aransas Pass, Vianney set up a Sweet Life “studio” in a small house in Driscoll. It had a fully stocked kitchen with refrigerator, stove and microwave. This was a place to cook, develop her food for her blog and upcoming book. Vianney’s photographer and videographer could come in, shoot everything, then she would clean up and leave all the props there as she headed back to Aransas Pass.

After seven years blogging, she has accumulated a lot of things to use as props in her photos and videos.  One entire room was full of props on shelves and another room was full of linens and tables. The Sweet Life studio worked well. Vianney had submitted everything to her publisher for the new slow cooker cookbook and the blog was continuing to have new followers.

Then on August 22, 2017, the Rodriguez family evacuated from their home in Aransas Pass. Vianney’s parents joined them as they made the Sweet Life studio into their evacuation shelter.  Sleeping on air mattresses, they were surrounded by shelves of props and linens.

As hurricane Harvey’s outer bands reached the coastline on August 25, communication was a problem and Vianney said, “There was no internet. We didn’t know what was going on. They were doing the best they could through Facebook but once the internet went out it was hard to communicate.” 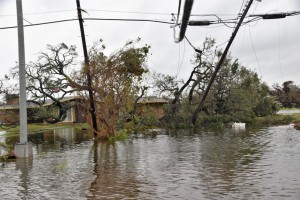 They were worried so the next day they returned to Aransas Pass. Vianney said the roads were blocked so they went through the back roads.  As they entered the city, she sadly explained, “It was not pretty.”

Being born and raised in Aransas Pass, Vianney found it difficult to see the high school and buildings like the bowling alley in their devastated state.

“Stuff you are used to seeing every day is damaged,” she said. “Even the helicopter in front of the VFW – it was tipped over and the blade was up against the house across the street! It was sad.”

As they reached their homes, the Rodriguez family house was devastated while the parents’ next-door structure only had minor damage. Vianney and her husband decided to relocate temporarily to the small house in Driscoll and hope to return to their Aransas Pass home in the future when contractors would be more available.

” It has been an adjustment,” said Vianney but as other hurricane survivors have learned, she added, “Now I know I don’t need that much.”

Without the internet after Harvey, Vianney didn’t get to go through the first two passes of edits to her cookbook. Before the publisher sent it to printing, she asked if Vianney wanted to add anything.

She and her husband had taken the girls and dogs to the beach in Rockport the week before Harvey. Vianney took a picture with her phone and using that photo with a little note in the back to her hometown, she dedicated her work to her community.

Copies of “The Tex-Mex Slow Cooker” by Vianney Rodriguez are available at Target, Barnes and Noble and on Amazon.  Follow her blog “Sweet Life” at www.sweetlifebake.com where you can also see the next event she will be visiting