Each year, beginning in 1999, the National Military Appreciation Month (NMAM) is celebrated in May. NMAM honors the active and former members of the U.S. Armed Forces, including those whose lives were lost while serving their country. Throughout the state of Texas, events and ceremonies are held to express support for those who serve now or served previously to protect the United States of America. In Rockport, TX a new retreat opportunity for veterans, active duty military members and their families was launched on May 11, 2018, showing the founders’ appreciation for the military. 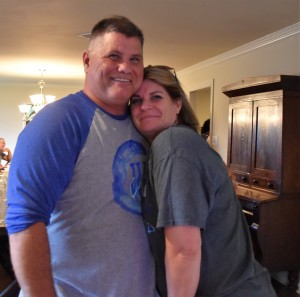 This new non-profit emerged from the devastation of hurricane Harvey in the North Bay area. Dave and Tracy Jones had dreamed of providing a location for a service-related retreat following the suicide death of a veteran friend who suffered from PTSD. following the landfall of Harvey, the Jones couple formed the Rockport Warriors United, located a Rockport property with the space needed and began organizing volunteers and planning.

By 6:00 p.m. on Friday, May 11 the circle drive at 1130 E. Linden was lined with cars and pickup trucks. Dave and Tracy were by the front door with other volunteers as they welcomed their weekend guest warriors. Some of the earlier arrivals were relaxing on the long veranda which connects the main part of the house to the rec room/bunkhouse. 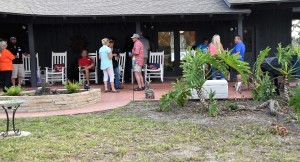 One veteran, standing by himself, said he had moved to Rockport recently and was looking forward to meeting other vets from the area. Inside the rec room, sitting by himself in the lounge area, another veteran from Mathis expressed his appreciation for the openness of the space. As he shared his different challenges stemming from brain injury and anxiety, he relaxed while looking at the large windows which offered a view of the sky.

Tracy began directing the guest warriors to the dining area with a long “boarding house” style table with matching white table settings for each veteran. Volunteers prepared to serve the BBQ dinner. As every special guest took his seat, Dave stood at the head of the table and offered grace for the first meal to be served in the new warrior retreat home.

As the guests enjoyed dinner, conversations often centered on the expectations for the off-shore fishing trip planned for Saturday. Making new friends and looking forward to new adventures together, the warriors were connecting with others who could understand them without lengthy explanations.

The June Retreat Weekend will feature bay fishing. Each month a new adventure will be planned but the connections made with fellow warriors will be the longest lasting memories.

Anyone can become a part of the Rockport Warrior United story as a volunteer or a donor. Follow them on Facebook or visit the website at www.rockportwarriorunited.com for details.