One of the favorite recreational opportunities found in the North Bay area is fishing – bay fishing from a boat…bank fishing…wade fishing…pier fishing. Each has advantages and disadvantages compared to the others such as needed equipment and species of fish usually caught. Many may consider pier fishing to be for young or elderly fishermen or those who do not have a boat, but many excellent anglers can be found fishing from a pier. In the North Bay area, hurricane Harvey damaged most of the favorite fishing piers and destroyed some, including one at Holiday Beach.

Laying along the coastline of Copano Bay, Holiday Beach includes natural marsh areas used by wintering whooping cranes. These marshes are included in the Texas Bays and Estuaries System as protected areas. Holiday Beach grew amid these protected areas and developed five canals, an office, a community building with a swimming pool, two boat ramps, a kayak park and a 365-foot fishing pier.

On August 25, 2017, few residents remained in Holiday Beach. Evacuations had been ordered for the community. President of the Holiday Beach POA, Doug Buster secured his property and assisted others in preparing for the category 4 storm before evacuating himself.

When Buster returned from San Antonio two days later, Holiday Beach was a disaster area. He said 50% of the houses were gone completely, reduced to a pile of rubble or severely damaged. 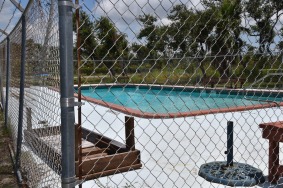 The remaining ones suffered shingle/roof damage. No home was left untouched. The community’s pool was the only part of the POA’s assets which remained undamaged.

Buster said a resident who remained during the hurricane, described his observations. He said as Harvey’s winds first reached Holiday Beach, the waters from the canals were pushed into Copano Bay, leaving them dry. Then as the winds shifted, a 12-foot wall of water returned.

This swell of water from the west caused homes to be lifted from their foundations and annihilated the Holiday Beach fishing pier along with other private ones.

Most of the communities severely damaged by Harvey are incorporated cities with city employees to carry out the city property recovery efforts. Holiday Beach is depending on their POA officers and volunteers as they repair and rebuild. They are now proceeding with replacing their fishing pier. Volunteers are now building fences and setting poles at the pier park. Property owners are donating to their POA as they attempt to raise funds for the needed pier materials.

Follow My Coastal World on social media or at www.mycoastalworld.com for future updates.