As students at Charlie Marshall Elementary School in Aransas Pass listened to the morning announcements on Friday morning, they received a challenge, “Learn something new this weekend!”. Ten-year-old Emmadacie O’Campo was excited about going to the Fulton Mansion to paint on slate, Saturday, January 26. Although, she knew how to paint, she had never seen the mansion and did not know what slate was so Emmadacie was sure she would be able to tell her teacher she learned something new.

The Winter Workshop Part 1 was held at the Fulton Mansion State Historical Site’s Education and History Center in Rockport, Texas. After checking in, participants entered a larger room with several round tables which were covered with blue plastic cloths.

Along the side of the room were two long tables. One table held various stencils, tubes of paint, brushes of all sizes, small sponges and paper towels. The other was covered with stacks of pieces of slate of different sizes and shapes.

Brady Cain, Fulton Mansion Educator, shared some of the history with the participants, including that some of the slate was red and some was black. He then explained why they were different including that the red slate was older. Some came from the restoration of 1980 and others came from the most recent one following the damage by Hurricane Harvey.

Emmadacie chose the largest piece of red slate because, she said, it had more history and was from Wales. She planned to paint the Fulton Mansion freehand rather than use a stencil, so she chose the paints and brushes she thought she would need. Christi Morgan, Museum Store Manager, and Dawn Bechtol, Friends Volunteer, were busy making sure everyone had what they needed including line drawings of Fulton Mansion for Emmadacie and a few others.

“I’m going very slowly,’ said Emmadacie, “Because I don’t want to make mistakes and the details are very small. This takes a lot of time.”

As she worked, Fulton Mansion Assistant Site Manager Jessica Paterson watched Emmadacie’s progress and shared bits of information. She told her the roof was a mansard which allowed an extra level of living space and the windows on this level were called dormers. Next, she pointed to the windows on the level below. Above these windows were eyebrows which are very noticeable in Emmadacie’s painting.

Refreshments were provided by the Friends and Emmadacie stopped painting for a short time as she walked around looking at other slate painting creations. One woman at a different table was also painting the mansion free handed but hers included a live oak tree in the foreground. 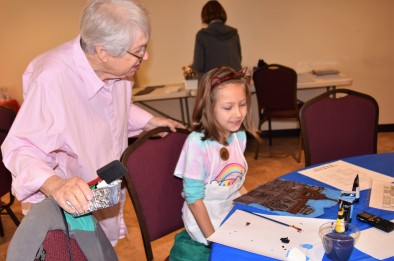 As Emmadacie returned to resume her painting, she remarked, “We both painted the same thing, but she had her impression and I have my impression.”

Three women worked on their slate paintings at Emmadacie’s table. One asked the other if she should add a sun to the top of her creation. During the discussion, one said, “Let’s ask the expert. If I paint a sun, should the darkest color be in the center or the outside?” Without hesitation the 10-year-old responded, “I’d paint the darkest on the outside.”

One of the other women picked up a small sponge and began smearing blue over the previous painting saying she did not like what she had painted. Emmadacie watched as the blue mixed with the other colors to completely cover the piece of slate. Sometime later, she went to the supply table and chose a shade of blue and picked up a sponge.

Quickly Emmadacie began applying the blue around her incomplete mansion then announced she would still need to add the sun.

One by one the other workshop participants completed their slate paintings which were carried outside to be sprayed with a protective sealant. Emmadacie worked tirelessly to complete the details of the Fulton Mansion then chose an orange she intended to use for the sun. With a small brush she painted two streaks of orange in the blue sky above the mansion, even though she had never seen a sunset from her painting’s perspective.

While waiting for Emmadacie’s sprayed painting to dry, a visit to the gift shop provided a chance to see examples of slate jewelry planned for the February 23 Winter Slate Workshop. On March 23 the workshop participants will make a slate serving plate. For further details about the workshops or the Fulton Mansion visit their website at: http://www.thc.texas.gov/historic-sites/fulton-mansion-state-historic-site or see photos of other slate paintings at: https://www.facebook.com/pg/visitfultonmansion/photos/?tab=album&album_id=1974945309209695&__tn__=-UC-R

Emmadacie met the challenge she had received and learned several new facts as well as experienced a new art medium, but she was not the only person learning. Emmadacie also demonstrated that, when encouraged, even a 10-year-old is able to be the one sharing something new with those of an older generation. 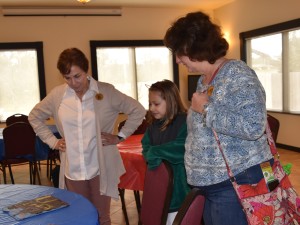 3 thoughts on “Who is the mentor?”